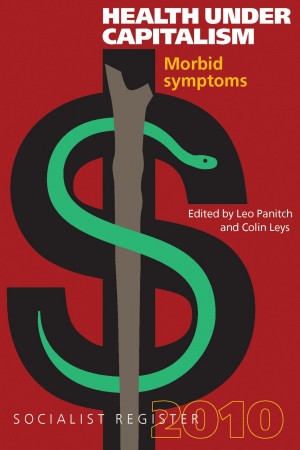 Neoliberal globalisation, a predominant theme of the Socialist Register over the past 15 years, is brought into focus in this volume in relation to its impact on the most important area of human life: health. All the elements of public health, from a balanced diet to decent housing, job security and job satisfaction are crucial in determining how well and how long people live. This is partly a matter of giving the human body what it needs to reach its full physical potential, but also a matter of preventing disease and, to a lesser extent, a matter of curing illnesses. The turn that capitalism has taken in recent decades has, in both these respects, been replete with morbid symptoms – the title of this volume, the Register’s 46th, on health under capitalism. A vast amount has been written about health, but very little from a systematically critical standpoint. The path-breaking work in the political economy of health begun in the 1970s by pioneers such as Lesley Doyal, Vicente Navarro and Julian Tudor Hart has been too little followed up by others, at least in the English-speaking world. This is all the more remarkable, given the size and scope of the global health industry and its growing centrality as arena of capital accumulation. Our goal in preparing this volume was to help develop the historical materialist analysis of health under capitalism, focusing on the economic, social and political determinants of health in the neoliberal era; and on health care as an object of struggle, between commercial forces that seek to make it into a commodity and popular forces trying to make (or keep) it a public service and to reduce the current gross inequalities of access.

“Scholars of all stripes can surely benefit from this book the text bridges disparate and innovative subject matter to further expand and enhance the subject of health care policy and economics.”