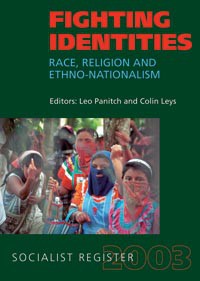 The Socialist Register has consistently focused on the processes driving globalization, as well as its costs–from our much-cited 1994 volume, Between Globalism and Nationalism, to our 1999 volume, Global Capitalism versus Democracy. In the present volume we have sought to take this a step further. The task of resubordinating the market forces that now control the world depends not only on understanding them, but on understanding them in their contradictoriness: seeing how they depend on structural relationships that produce problems and vulnerabilities, incoherence and conflict. The energy and commitment that brought so many tens of thousands of people to Seattle and Quebec City–not to mention the thousands of movements evolving in every city and many rural areas of the world, from Soweto to Chiapas–need to be backed by careful analysis of the way that capitalism’s contradictions are now manifested on a global terrain. This task is the primary focus of the 38th annual volume of the Register now in your hands. Our concept of contradiction has not been mechanical or theological. We were not looking for ‘primary contradictions’, let alone the primary contradiction. Still less do we mean to suggest that there are contradictions that will bring down capitalism of their own accord. On the other hand, we have been concerned with systemic contradictions as opposed to just tensions, conflicts, mere paradoxes, ‘ironies’ and the like; i.e., our focus is on structural relations inherent in capitalism which at the same time constitute or give rise to obstacles to its smooth or even continued expansion, and which offer opportunities for effective socialist practice.