By Marion Gret and Yves Sintomer 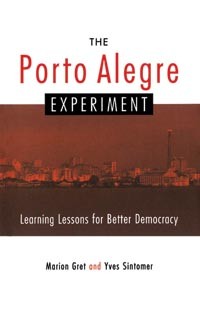 Porto Alegre presents an apparent alternative to the world. With its experiment in participative budgetmaking over the past decade, this city has institutionalised the direct democratic involvement, locality by locality, of ordinary citizens in deciding spending priorities.

The Porto Alegre Experiment gives a down to earth description of the practice of democratic innovation while asking the difficult questions. Can local participation in public management really strengthen its efficiency? Is genuine participation possible without small groups monopolizing power? Can local organizations avoid becoming bureaucratized and cut off from their roots? Can neighbourhood mobilisation go beyond parochialism and act in the general interest? The book also raises the bigger question about what lessons can be learned from Porto Alegre to renew democratic institutions elsewhere in the world. This illuminating and independent-minded investigation will be of use to scholars, politicians and those campaigning for a deepening of democratic institutions worldwide.