The Life and Times of a North End Institution 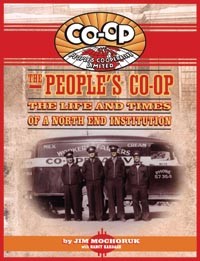 Located in the heart of Winnipeg’s Northend, the most class-conscious and ethnically diverse part of the city, the People’s Co-op was always a different kind of institution. Founded and then successfully run for over sixty years by members of Winnipeg’s vibrant left-wing Eastern-European community, this co-op mixed Marx, milk and the masses into a heady brew of social activism and co-operative enterprise.

Beginning with a small coal and fuel yard in 1928-and a much larger dream of changing the world, this overtly Marxist co-op quickly established itself as an important business and social presence in the North End. It eventually branched out into the dairy trade, established a lumber yard, a public garage and at one time owned and operated two dairy plants in rural Manitoba. At its height, it employed over 150 men and women and contributed millions of dollars to the Manitoba economy-all of this in the face of cut-throat competition and well-orchestrated campaigns of red-baiting.

Heavily illustrated with never before seen photos and images, this is an illustrated history both of a co-operative business enterprise and a unique social institution.