The Guy in the Green Truck 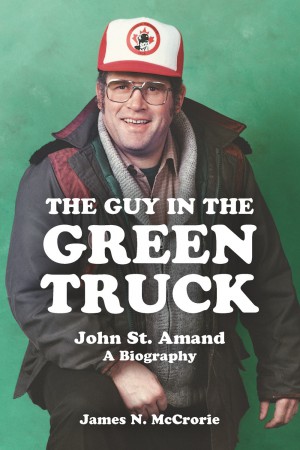 Few mature men and women choose to abandon secure employment with handsome health and retirement benefits for a cause and an uncertain future. This biographical memoir is about a man who did just this, abandoning a promising career as a sociologist at Mohawk College in Hamilton, Ontario, for the turbulent life of union organizer in Nova Scotia.

In one of his first organizing campaigns, John St. Amand crisscrossed industrial Cape Breton signing up workers to the new Canadian Miner’s Union and became known as “the guy in the green truck.” Archie Kennedy, a miner who worked with John, said, “It is difficult for ‘mainlanders’ to penetrate the culture of Cape Breton and to be accepted by Cape Bretoners as one of their own. John St. Amand did exactly that.” He had a great ability to communicate with people.

St. Amand’s life became a testament to those who choose to advance the cause of the underdog in the hope of building a better society for us all. This book is a tribute to a courageous fighter who worked tirelessly to bring hope and justice to those most oppressed and neglected in our society. His courage, daring, incorrigible sense of mischief and his dedication to working men and women all combined to banish any thought of defeat in the face of lost campaigns.