The Gardens of Their Dreams

Desertification and Culture in World History 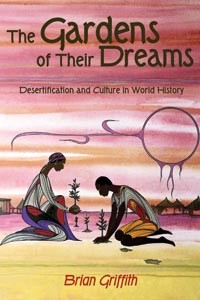 Over the past 7,000 years, a desert slowly spread through the center of the Old World. Our ancestors watched as patches of desolation appeared in the landscape like holes in worn-out cloth. The affected regions had been wastelands before in previous arid ages, but this time human civilizations were on hand to intensify the effect. Eventually, the “true deserts” came to resemble the moon or the sandstorm plains of Mars. Where the web of life is stripped to the bone, this is how it looks.

According to some desert peoples’ beliefs, their ancestors were cast out from a garden of paradise, as a punishment for their sins. Since that time they struggled or wandered in a kind of exile. Their true home, if they ever found it in a promised land or another world, would resemble the gardens of their dreams.

Over vast regions of the world, people have already lived in a wasteland for centuries. Our history is a series of collisions, as wave after wave of migrants from the lands of scarcity invaded China, India, Africa and Europe. In a panoramic view we can trace the impact of environmental decline on women, politics, economics and religion. We can also discern what is working to heal the world.

“The Gardens of Their Dreams is a unique and important book. It contains fascinating information from an array of cultures and world regions about our past. It verifies the connection between a history of violence and domination on the one-hand, and environmental degradation and desertification on the other. It has direct implications for our time and the choices we must make if we and the generations still to come are to have a better future. I congratulate Brian Griffith for this accomplishment.”

— Riane Eisler, author of The Chalice and the Blade, Sacred Pleasure and Tomorrow’s Children