The Devil and the Deep Blue Sea

An Investigation into the Scapegoating of Canada’s Grey Seal 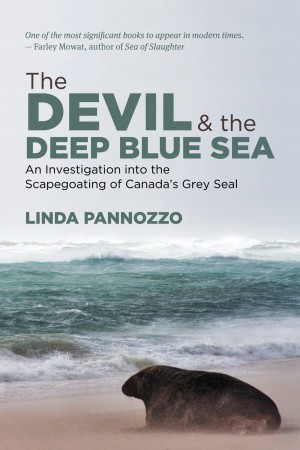 In the early 1990s the collapse of the Atlantic groundfish stocks signaled the destruction of life in the seas, but it also threw 40,000 people out of work, unraveling the very fabric of rural life throughout Atlantic Canada. Twenty years later, even after fishing moratoriums and limited directed fishing, the cod have not recovered and some stocks are on the verge of biological extinction. The fishing industry, politicians and government scientists blame the growing population of grey seals – a species that had up until the 1970s been severely depleted – and argue that a large-scale cull of the population is needed to save the cod.

In The Devil and the Deep Blue Sea, Linda Pannozzo finds that the truth is much more complex and that the seals are scapegoats for the federal government’s mismanagement of the cod stocks, deflecting attention away from the effects of global warming and the continued use of destructive fishing methods. The collapse of the cod, its failure to recover and the recent recommendations for large-scale grey seal culls are stark reminders of how fisheries, science and public policy are increasingly estranged from each other.

“The Devil and the Deep Blue Sea is one of the most significant books to appear in modern times. With astonishing and terrifying clarity and passion it tolls a fearful tocsin. Unless we vastly improve upon our treatment of the oceans, all animate creation may pay a fatal price for our abuse, and the devil will have added a new and frightful realm to hell.”

“Linda Pannozzo, a meticulous researcher and a gifted writer, has written a powerful study of the scapegoating of the grey seal for the failure of cod to recover. Her book mercilessly documents the ignorance and arrogance that underpin our futile attempts to “manage” the ocean environment. Ultimately, her work shows that healing the seas will require profound change not in other species, but in our own.”

“Seals eat fish and, hence, if you kill all the seals, you should get more fish. This is the logic of the “culling programs” in Newfoundland and Labrador, but also that of the Japanese whaling industry, with the whale replacing the seals. Except that it ain’t so, as Linda Pannozzo shows in ‘The Devil in a Deep Blue Sea’, which explains, among other things that marine mammals can often increase the population of fish we like, by feeding on their predators and competitors, which are often fish we don’t like. This is not really complicated, but you need to think before you go bashing seals. This is what this excellent book is about.”

“By blaming seals and proposing large-scale culls, officials have deflected attention away from the more difficult and complex issues of climate change and destructive fishing methods.”