The Dynamics of Free Market Capitalism

By James Petras and Henry Veltmeyer 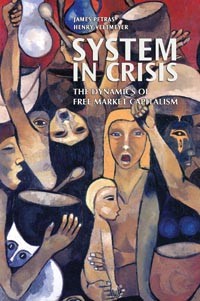 In the late 1960s the operating world capitalist system hit a snag, exposing cracks that went to its very foundations. At first, this crisis was viewed as part of a normal business cycle of capital accumulation in which markets become saturated. The reaction created a mass of unemployed workers, reduced purchasing power and consumption capacity which initiated a further downward cycle of disinvestment and recession. The efforts to revitalize the capitalist system included the restructuring of world production, new information-based technologies designed to revolutionize the structure of production, a new mode of capital accumulation and regulatory regime, and a program of policy reforms and structural adjustments.

By discussing the very cracks that neo-liberalism tries to disguise, James Petras and Henry Veltmeyer explain how these reactions attempt to prop up a system that continues to fail the global community. System in Crisis also examines the nature of the class divisions and the political repercussions of the anti-globalization movement. This analysis provides readers with a more general perspective on the broader anti-globalization movement and the possibilities for unifying the diverse forces of resistance and opposition to neo-liberalism, capitalism and imperialism–and the prospects for an alternative, more human, socialist form of development.