Strategies for the Year 2000

By Barbara Roberts and Deborah Stienstra 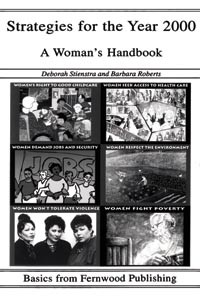 How well has Canada measured up to its obligations under the two agreements it signed during the UN Decade of Women? The authors of this book detail the terms of the conventions (the Convention for the Elimination of all Forms of Discrimination Against Women and the Forward Looking Strategies for the Advancement of Women by the Year 2000) and have painstakingly chronicled the progress the provincial, territorial, and federal governments have made towards fulfilling their legal obligations in areas such as women’s participation in decision-making, childcare, violence against women and so on. All levels of governments are found wanting. As an assessment of progress on women’s equality in Canada, it is fascinating reading and a thorough resource.

This book also has a second purpose. It is a how-to manual for women in Canada and elsewhere who wish to assess the progress made by their governments in implementing women’s equality obligations incurred by the signing of the two international agreements. The authors explain what these agreements entail and show how readers can select their own priority issues, gather information from official and popular sources, and work with women;s organizations to analyze how their governments have complied with, ignored, or violated these commitments. The book includes step-by-step examples of each stage of the process, and suggests some educational, lobbying and other activities groups might wish to undertake. Each chapter contains a brief list of Canadian and international references with suggestions for obtaining further resources.