By Murray Knuttila and Wendee Kubik 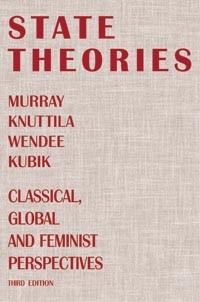 The Third Edition of State Theories: Classical, Global and Feminist Perspectives formally introduces a new co-author, Wendee Kubik. Since the first edition of State Theories was published thirteen years ago the capitalist system has undergone major transformations. These changes in the “real world” have been accompanied by major new theoretical developments in how scholars attempt to understand the structure, role, and operation of the state in capitalist societies. The revised text includes three new chapters that update both the historical context and recent theoretical developments in the field of state theories. One new chapter examines the rise and fall of the welfare state in the Fordist and post-Fordist eras as the context for understanding recent developments in pluralist and neo-Marxian theory, the recent debates surrounding the relevance and role of the nation state, and the post-modernist critique of so-called totalizing theories. A second new chapter considers the work of major feminist scholars as it addresses issues relating to relationships of women to class, power, and the gendered nature of the liberal democratic state. A new conclusion points to critical weaknesses in existing approaches, and suggests potential new theoretical and research directions.