How Media and Politicians Misdiagnosed the COVID-19 Pandemic 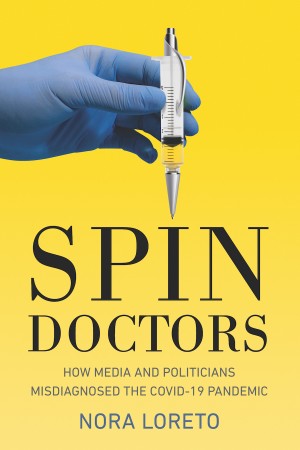 As Canada was in the grips of the worst pandemic in a century, Canadian media struggled to tell the story. Newsrooms, already run on threadbare budgets, struggled to make broader connections that could allow their audience to better understand what was really happening, and why. Politicians and public health officials were mostly given the benefit of the doubt that what they said was true and that they acted in good faith.

This book documents each month of the first year of the pandemic and examines the issues that emerged, from racialized workers to residential care to policing. It demonstrates how politicians and uncritical media shaped the popular understanding of these issues and helped to justify the maintenance of a status quo that created the worst ravages of the crisis. Spin Doctors argues alternative ways in which Canadians should understand the big themes of the crisis and create the necessary knowledge to demand large-scale change.

“Spin Doctors is a remarkable, month-by-month account of the Canadian media’s interest, lack of interest, and choices driven by political and economic interest during the opening waves of the COVID-19 pandemic. With intricate detail and masterful research, Nora Loreto’s deft analysis pulls no punches and uncovers truths from multiple angles—narrating an all-too-real story of ill-prepared politicians, a panicked population, and Canadian journalism’s complicated response to the story of a lifetime.”

— Niigaan Sinclair, Columnist at The Winnipeg Free Press & Associate Professor at the University of Manitoba