By Jordan House and Asaf Rashid 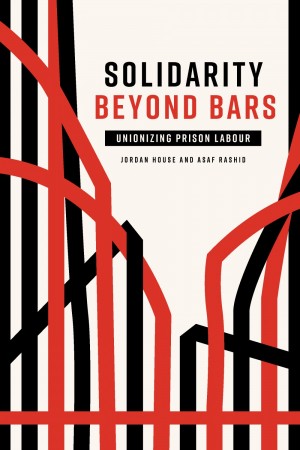 Prisons don’t work, but prisoners do. Prisons are often critiqued as unjust, but we hear little about the daily labour of incarcerated workers — what they do, how they do it, who they do it for and under which conditions. Unions protect workers fighting for better pay and against discrimination and occupational health and safety concerns, but prisoners are denied this protection despite being the lowest paid workers with the least choice in what they do — the most vulnerable among the working class. Starting from the perspective that work during imprisonment is not “rehabilitative,” this book examines the reasons why people should care about prison labour and how prisoners have struggled to organize for labour power in the past. Unionizing incarcerated workers is critical for both the labour movement and struggles for prison justice, this book argues, to negotiate changes to working conditions as well as the power dynamics within prisons themselves.

“From Amazon to COVID, from racial justice struggles to housing, workers have been the backbone of collective struggle. In this book, Rashid and House take us behind bars to explore the histories and contemporary struggles of incarcerated workers and the possibilities for organizing. A must-read for all interested in abolition movements, workers’ struggle, and the urgent need to collectively organize for a better world.”

“Solidarity Beyond Bars should be read by social justice and labour scholars and activists. House and Rashid take the reader through the byzantine bureaucratic, labour, and punitive structures that render prisoners’ work invisible, denying them the same rights as free labourers. Well researched and engagingly written, Solidarity Beyond Bars not only describes the current (and deplorable) state of prison labour but explains how legal paradoxes and capitalist impulses brought Canada to this point, and what the paths forward may be.

— Melissa Munn, co-author of Disruptive Prisoners and On the Outside

“This book is a timely and important contribution to scholarship on abolition, prisoners’ rights, and labour organizing. The urgent topic of prison labour unionization has rarely been articulated or proposed. The authors discuss the intricate links between capitalism and imprisonment, showing how unionization of prison labour can ameliorate some of the harms of incarceration, is compatible with larger projects of prison abolition, and how prisoners’ inclusion in workers struggles will be beneficial to broader struggles against capitalist exploitation.”

— Bob Gaucher, co-founder and previous editor of the Journal of Prisoners on Prisons