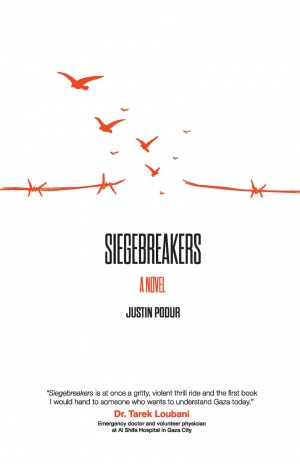 Under the crushing weight of the siege of Gaza, Laila and Nasser are members of the Palestinian resistance fighting desperately to free their people. Together, they learn of a plan to unite the disparate Palestinian factions and break Israel’s siege. Unknown to them, Ari, a brilliant Israeli spy, has decided that his conscience can no longer allow him to participate in the starvation of Gaza. A double agent whose every move is under mounting suspicion, Ari reaches out to the American contractors who trained him with a secret plan. As they all struggle to break the siege, they face the wrath of the Israeli military machine.

“Siegebreakers is at once a gritty, violent thrill ride and the first book I would hand to someone who wants to understand Gaza today.”

“Based on an industrious research, this dramatic and powerful tale shows once more the power of fiction to illuminate and expose what the media fails, or is unwilling, to disclose about life under siege in the Gaza Strip and its impact on the people incarcerated in it.”

— Ilan Pappe, historian and author of The Ethnic Cleansing of Palestine

“Offers a radically different view of the conflict in Gaza, and at the very least should leave readers with an appreciation for the daily struggles of the Palestinian people.”