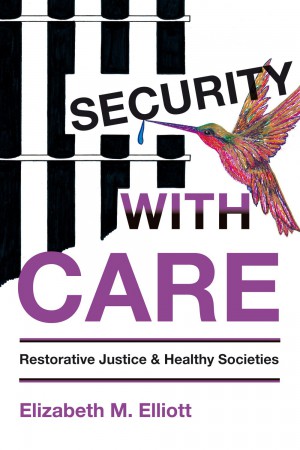 “I learned that the problems were much deeper than a flawed criminal justice system, and that our work needed to begin in our relationships with each other and the natural world, and most importantly, with ourselves.” (from the preface)

Restorative justice, as it exists in Canada and the U.S., has been co-opted and relegated to the sidelines of the dominant criminal justice system. In Security, With Care, Elizabeth M. Elliott argues that restorative justice cannot be actualized solely within the criminal justice system. If it isn’t who we are, says Elliott, then the policies will never be sustainable. Restorative justice must be more than a program within the current system – it must be a new paradigm for responding to harm and conflict. Facilitating this shift requires a rethinking of the assumptions around punishment and justice, placing emphasis instead on values and relationships. But if we can achieve this change, we have the potential to build a healthier, more ethical and more democratic society.