The Origins of the Women’s Shelter Movement in Canada 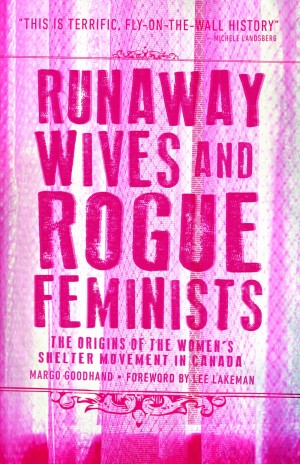 In the supposedly enlightened ’60s and ’70s, violence against women was widespread. It wasn’t talked about, and women had few, if any, options to escape their abusers. Yet in 1973 — with no statistics, no money and little public support — five disparate groups of Canadian women quietly opened Canada’s first battered women’s shelters. Today, there are well over 600.

In Runaway Wives and Rogue Feminists, journalist Margo Goodhand tracks down the “rogue feminists” whose work forged an underground railway for women and children, weaving their stories into an unforgettable — and until now untold — history.

As they lobbied for funding, scrounged for furniture and fended off outraged husbands, these women marked a defining moment in Canadian history, triggering monumental changes in government, schools, courts and law enforcement. But was it enough to stop the cycle of violence? Forty years later, these pioneers describe how and why Canada has lost its ground in the battle for women’s rights.

This is terrific fly-on-the-wall history: personal, immediate, juicy with anecdotes and real voices, telling the lively story of how young feminists defiantly invented women’s shelters in Canada back when violence was totally ignored or denied. And Goodhand brings us right up to date with feminism’s evolution in the confusing time of Trudeau and Trump.

Runaway Wives and Rogue Feminists gives voice to the tenacious and until now, unrecognized women who saved thousands of lives. Goodhand also gives insight and context to Canada’s often uncomfortable relationship with feminism and our attitudes toward violence against women. Runaway Wives and Rogue Feminists is a must read for feminists, academics and anyone interested in women’s contributions to Canadian history.”