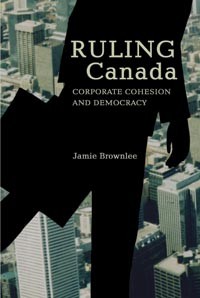 Ruling Canada critically examines Canada’s “economic elite”–a collection of the country’s richest and most powerful individuals, many of whom preside over Canada’s largest corporations. Brownlee argues that this corporate elite is increasingly unified and class conscious. As a direct result, a broad array of state policies and programs have been cut and/or implemented which serve the interests of this elite minority at the expense of most Canadian citizens. Business elite solidarity is possible because of a several unifying mechanisms: interlocking directorates, the structure of corporate ownership/control networks, the mass media, intersectoral policy organizations, business-oriented think-tanks and foundations, and corporate ties to the state and political system. In the face of formidable corporate domination and a growing threat to democracy in Canada, Brownlee emphasizes that existing relations are not inevitable and could be modified through networks of concerned citizens coming together to challenge the political and economic status quo.