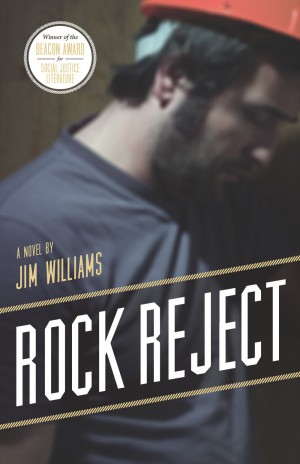 Winner of the inaugural Beacon Award for Social Justice Literature.

Wracked with guilt and self-loathing after the death of his wife, Peter abandons his life in Toronto for one of exile and desolation in rock reject, a ghastly mountain-top asbestos mine in northern British Columbia.

As Peter adapts to his dangerous new surroundings, he witnesses the devastating effects of mining on the health of his fellow miners, the environment and the nearby Aboriginal community. drawn into the local miners’ union and safety committee, Peter’s confrontations with company officials give him the strength to come to terms with the tragic consequences of his self-centered behav- iour, which led to his wife’s death.

Set in the 1970s – at a time when the dangers of asbestos first began to surface – Rock Reject is a story about accepting responsibility for one’s actions, corporate irresponsibility and the blind pursuit of profit at the expense of physical and environmental health.

“Jim Williams’s characters enter the masculine world of mining yearning for oblivion, but moral imperatives catch them up. Rock Reject shows us how work does not end in a paycheque but rather reaches into the distant corners of society binding us together–for better or worse. Jim Williams leads us through the corridors of union politics as he draws us through the dark tunnels of the soul.”