Canadian Public Policy in the Age of Global Capitalism 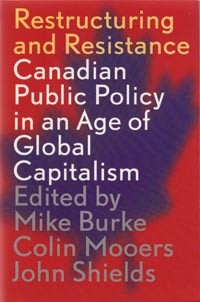 This collection surveys major areas of neoliberal policy restructuring by various levels of Canadian government. Unlike other academic studies it also considers theoretical and practical issues connected with movements of resistance against the neo-liberal agenda. Part one situates these developments theoretically in the context of globalizing capitalism and the changing role of the state, the labour market, policy formation and federalism. Section two examines six major areas of policy restructuring, ranging from health care and education to human rights and communication policy. The final section considers the strengths and weaknesses of current political strategies of resistance and the new challenges imposed by global capitalist restructuring. This volume provides both a vital assessment of the social consequences of neoliberal restructuring and a provocative contribution to the debate over the renewal of the left in Canada.