A Grassroots Collection of Stories, Poetry, Photos and Analysis from the FTAA Protests in Québec City and Beyond 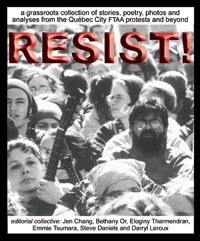 In late April, tens of thousands of people gathered to protest at the Second People’s Summit of the Americas (the FTAA Summit). RESIST! is a collection of young peoples’ experiences from Quebec City. Surprising in their honesty, these accounts, including poems, photos and essays, look at what happened during the FTAA weekend. The contributors seek answers to explain the treatment of the protesters, marvel at the strength of character of those that they encountered, and celebrate many successes. The material gathered here reflects the variety of people who felt compelled to go to the protests and talks about how they chose to participate.

The contributors found themselves on either side of the fence and in jails, and they watched as friends were harassed or taken away by police. They talk about their participation in the Saturday march, sleeping on gymnasium floors and being fed and taken care of. Amongst the personal stories are responses from many different groups and essays that analyse the FTAA, the anti-globalization movement and organizations involved in acts of resistance.

An engaging look at the Second People’s Summit of the Americas, RESIST! presents a much different experience from that depicted in the news coverage. It encourages all of us to be forward looking and to be active within our own communities.