Social Security in the Late 1990’s 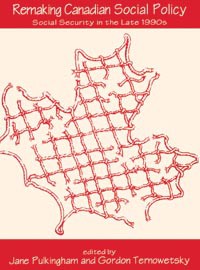 This book critically examines the changing landscape of Canadian social policy that is taking place as a result of the Liberal government’s Social Security Review (SSR) and recent budgets. The objective is to provide an alternative venue to the “official” consultation process of the SSR, while at the same time providing input into the rebuilding of Canadian social programs. Major factors that led to the SSR are examined: the role of the Minister of Finance, the fiscal power and moral authority of the federal state in a decentralized nation, globalization and labour market restructuring, the concept of workfare, the impact on women, the role of “popular sector” groups and the future of the welfare state.