Aboriginal People’s Encounters with the Police 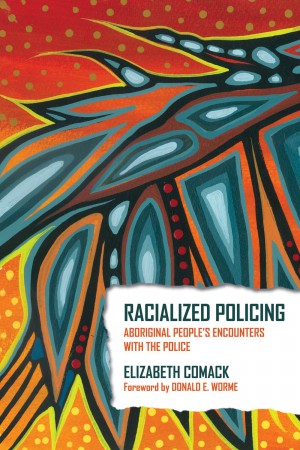 Policing is a controversial subject, generating considerable debate. One issue of concern has been “racial profiling” by police, that is, the alleged practice of targeting individuals and groups on the basis of “race.” Racialized Policing argues that the debate has been limited by its individualized frame. As well, the concen- tration on police relations with people of colour means that Aboriginal people’s encounters with police receive far less scrutiny. Going beyond the interpersonal level and broadening our gaze to explore how race and racism play out in institutional practices and systemic processes, this book exposes the ways in which policing is racialized.

Situating the police in their role as “reproducers of order,” Elizabeth Comack draws on the historical record and contemporary cases of Aboriginal-police relations – the shooting of J.J. Harper by a Winnipeg police officer in 1988, the “Starlight Tours” in Saskatoon, and the shooting of Matthew Dumas by a Winnipeg police officer in 2005 – as well as interviews conducted with Aboriginal people in Winnipeg’s inner-city communities to explore how race and racism inform the routine practices of police officers and define the cultural frames of reference that officers adopt in their encounters with Aboriginal people. In short, having defined Aboriginal people as “troublesome,” police respond with troublesome practices of their own. Arguing that resolution requires a fundamental transformation in the structure and organization of policing, Racialized Policing makes suggestions for re-framing the role of police and the “order” they reproduce.

“This book delves deep into the psyche of society’s attitudes towards racism, towards the racialization of issues, of social structures, and, importantly, of the police. It exposes the human element of justice, the attitudes and subconscious generalizations that culminate in differential justice, differential treatment, and the imbalance of socio-economic and criminal circumstances between peoples of Canada. Whether the abuse is racism, sexism, or discrimination on any other abhorrent ground, it takes a leap of faith to make the right connections between these and the behaviours of the police, and further still, the courage to expose it. This is a task that we are all challenged with if we value the aspiration of a free and democratic society.”

— From the Foreword by Donald E. Worme, QC, IPC