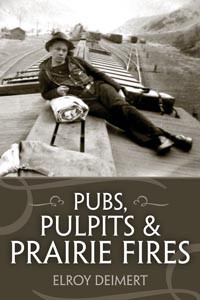 History professor Paul Wessner hangs out at BJ’s Bar and Cue Club on Tuesday nights sharing his accounts of the On-to-Ottawa Trek and the Regina Riot in 1935. Due to local interest in his research, he invites Doc Savage and Matt Shaw, real-life leaders on the Trek, to deliver first-hand accounts of the Trek and the Riot. He encourages listeners to contribute when no guests are scheduled to tell their stories. The narratives broaden to the evolution of the Social Credit and CCF prairie fires and their lasting legacies in Canada. Great Depression police tactics are compared to the repression of dissent at the Battle of Seattle and the Quebec Summit of the Americas. The audience at BJ’s Bar end up on their own odysseys, discovering that they are actually a part of the narratives that are shared on Tuesday nights. Paul’s own journey pulls both the readers and his weekly pub colleagues into the middle of the living oral history.