The Political Economy of Public-Private Partnerships in Canada

By John Loxley and Salim Loxley 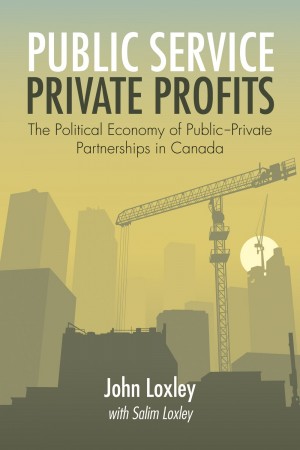 PPPs/P3s have become all the rage amongst every level of government in Canada in recent years. Proponents claim P3s reduce the costs of building and operating public projects and services,that projects and services are delivered more efficiently through the P3 model, so that in the end taxpayers are better off economically and as consumers of public goods. This book tests all of these claims, and more, finding them mostly empty, ideological assertions. Through an exhaustive series of case studies of P3s in Canada – from schools, bridges and water treatment plants to social services and hospital food – this book finds that most P3s are more costly to build and finance, provide poorer quality services and are less accessible than if they were built and operated by public servants. Moreover, many essential services are less accountable to citizens when private corporations are involved.

“One frightening consequence of the global financial crisis of 2008-09 is the renewed effort by private investors to force the privatization of public assets. And their tool of choice has become the public-private partnership. In this devastating and incredibly timely critique, John Loxley exposes P3s for what they are: a phony fiscal shell game that enriches investors at our expense. This book is an essential tool in the ongoing struggle to preserve the public good.”