By Stephen McBride and Heather Whiteside 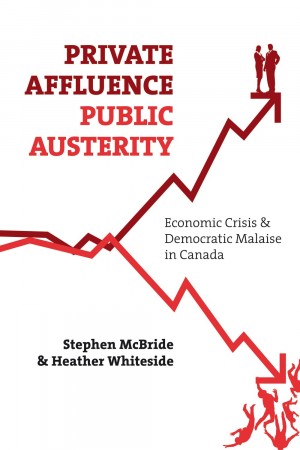 “The book is both timely and sorely needed. There is simply nothing like it. A brilliant and surprisingly clear analysis of the theory and practice of Canadian politics in the current conjuncture of capitalist development, the authors provide an exceptionally clear and most useful exposition of the forces at play, arising out of the propensity of capitalism towards crisis.”

Examining Canadian political and economic developments of the twenty-first century, Private Affluence, Public Austerity provides a systematic analysis of the dynamics of Canadian politics in the era of neoliberal globalization. Stephen McBride and Heather Whiteside conclude that, although the last three decades of neoliberal rule are characterized by recurrent crises, the system has proven to be resilient – even in the face of a severe recession. Canada’s “business as usual” approach to the recent financial crisis, an approach that fails to challenge the policies that are fundamental to the system and culpable for the crisis, is striking. Through policies aimed at the dismantling of the welfare state, privatization and the reduction of the state’s economic role – as well as an enthusiastic embrace of globalization and liberalized trade and investment regimes – the legacy of the Canadian political system is one of private affluence, public austerity and democratic decline.

Private Affluence, Public Austerity asks us to consider the relationship between neoliberalism and crisis, and their role in democratic decline. What is the legacy of neoliberalism? It also asks the difficult questions: What is the future of neoliberalism? And what role will Canada play in charting the course of that future? This book offers an engaging and enlightening exploration of the theories of contemporary capitalism and reminds us that overcoming democratic malaise is a necessary first step on the path to change.