Dissent and the Security State

By Andrew Crosby and Jeffrey Monaghan 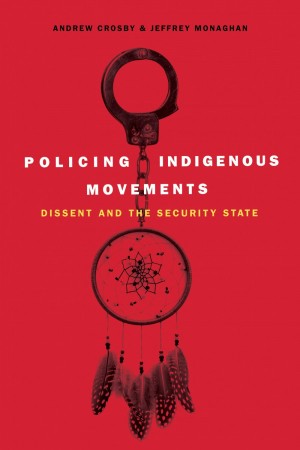 In recent years, Indigenous peoples have lead a number of high profile movements fighting for social and environmental justice in Canada. From land struggles to struggles against resource extraction, pipeline development and fracking, land and water defenders have created a national discussion about these issues and successfully slowed the rate of resource extraction.

But their success has also meant an increase in the surveillance and policing of Indigenous peoples and their movements. In Policing Indigenous Movements, Crosby and Monaghan use the Access to Information Act to interrogate how policing and other security agencies have been monitoring, cataloguing and working to silence Indigenous land defenders and other opponents of extractive capitalism. Through an examination of four prominent movements — the long-standing conflict involving the Algonquins of Barriere Lake, the struggle against the Northern Gateway Pipeline, the Idle No More movement and the anti-fracking protests surrounding the Elsipogtog First Nation — this important book raises critical questions regarding the expansion of the security apparatus, the normalization of police surveillance targeting social movements, the relationship between police and energy corporations, the criminalization of dissent and threats to civil liberties and collective action in an era of extractive capitalism and hyper surveillance.

In one of the most comprehensive accounts of contemporary government surveillance, the authors vividly demonstrate that it is the norms of settler colonialism that allow these movements to be classified as national security threats and the growing network of policing, governmental, and private agencies that comprise what they call the security state.

“An accessible must-read for all Canadians concerned about respectful relations with indigenous people and the decline of civil rights in the war-on-terror era.”