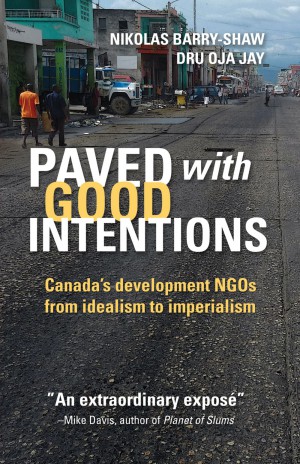 “NGOs are as Canadian as hockey,” declared a 1988 Parliamentary report. Few institutions epitomize the foundational Canadian myth of international benevolence like the non-governmental organization devoted to development abroad.

This book raises important questions about these organizations and their development projects: Just how “non-governmental” are organizations that get most of their funding from government agencies? What impact do these funding ties have on NGOs’ ability to support popular demands for democratic reforms and wealth redistribution? What happens when NGOs support a repressive regime? What happens when NGOs bite the hand that feeds them?

Cutting through the NGO catchphrases of “participation” and “empowerment,” Paved with Good Intentions is a critical history that examines the relationships between NGOs, the Canadian government and social movements, in both the North and South. Connecting the NGO boom to the onset of the neoliberal era, this book illustrates how NGOs have served to soften the blow of structural adjustment while co-opting dissent. This book is a call to judge NGOs by the standards they set for themselves when they claim to work for development in poorer countries.

“An extraordinary expose of the “soft imperialism” of aid organizations and nonprofits. In richly detailed case-studies, the authors unmask the puppetry by which rich countries use supposedly ‘humanitarian’ NGOs to promote their own economic and geopolitical interests.”

“Paved with Good Intentions is timely, hard-hitting and well-researched. Not everyone will agree with its conclusions, but this is exactly the kind of challenge that NGOs require to fulfill their mission for social change.”

“This book is sure to be controversial. As an exploration of the role of Canadian international development NGOs in the world, the book offers much to admire, much to challenge, and very much to debate. Such a debate is long overdue and can only strengthen the sector if engaged in an open and rigorous manner.”

“This book cuts through the fog of NGO hagiographies, and offers a sobering look at the close linkages between NGOs and Western governments and corporations. This is an important piece of scholarship.”

— Lamia Karim, author of Microfinance and Its Discontents