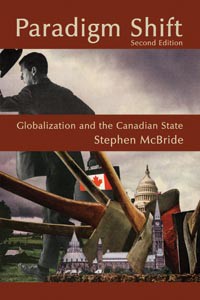 Canada has always been a global nation, integrated with the international economy and having close relations with succeeding hegemonic powers. Recently, globalization was accompanied by an intellectual paradigm shift: moderate state interventionism associated with Keynesian economic theories was replaced by an economic orthodoxy that confined the state to a minimal role and trumpeted the virtue of market solutions. Paradigm Shift evaluates the globalization debate through a Canadian lens and places Canada in the forefront of the analysis. Opposition to neo-liberal globalization emerged on several fronts: from political opposition within civil society and social movements, skepticism about the claims of the globalizers from academic researchers, and lack of enthusiasm by some nation-states which found, contrary to expectations, that they retained some power. The Bush administration’s aggressive unilateral foreign policy stimulated talk of a new imperialism and sharpened the debate over the nature of the new era. Canada faces difficult choices but so far the government shows intensified rather than lessened enthusiasm for removing obstacles to trade and investment. On the other hand, as the government moves toward greater integration with the United States, many Canadians seek a more independent path.