Out of the Depths, 4th Edition

The Experiences of Mi’kmaw Children at the Indian Residential School at Shubenacadie, Nova Scotia 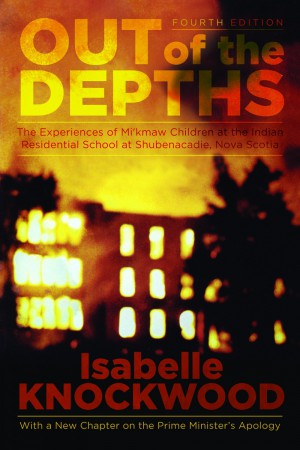 In the 1880s, through an amendment to the Indian Act of 1876, the government of Canada began to require all Aboriginal children to attend schools administered by churches. Separating these children from their families, removing them from their communities and destroying Aboriginal culture by denying them the right to speak Indigenous languages and perform native spiritual ceremonies, these residential schools were explicitly developed to assimilate Aboriginal peoples into Canadian culture and erase their existence as a people.

Daring to break the code of silence imposed on Aboriginal students, residential school survivor Isabelle Knockwood offers the firsthand experiences of forty-two survivors of the Shubenacadie Indian Residential School. In their own words, these former students remember their first day of residential schooling, when they were outwardly transformed through hair cuts and striped uniforms marked with numbers. Then followed years of inner transformation from a strict and regimented life of education and manual training, as well as harsh punishments for speaking their own language or engaging in Indigenous customs. The survivors also speak of being released from their school — and having to decide between living in a racist and unwelcoming dominant society or returning to reserves where the Aboriginal culture had evolved.

In this newly updated fourth edition, Knockwood speaks to twenty-one survivors of the Shubenacadie Indian Residential School about their reaction to the apology by the Canadian government in 2008. Is it now possible to move forward?