Open for Business/Closed to People 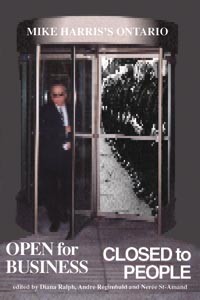 For anyone concerned about Mike Harris’s neo-conservative “Common Sense Revolution,” this book is a must. It chronicles Harris’s first year as premier and the emerging resistance movement. Part 1 puts the Harris “revolution” in context, exposing its underlying transnational corporate agenda and the previous right-wing U.S. and British governments on which it draws. It demonstrates how the smoke screen of populism and fiscal responsibility hides a fundamental attack on concepts of democracy and social citizenship. Part 2 spells out the profound toll which Harris’s policies are taking on the people of Ontario, especially on its most vulnerable members: low-income people, women, children, workers, and ethno-cultural and francophone communities. Part 3 describes a broad range of strategies to survive and win against this neo-conservative assault.