On Time! On Task! On a Mission!

A Year in the Life of a Middle School Principal 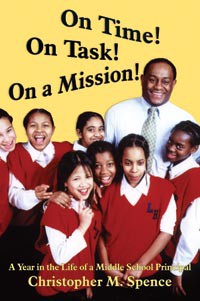 On his first tour of Lawrence Heights Middle School, Chris Spence was led past defaced bulletin boards in hallways scribbled with graffiti. Peering into the library, he saw kids with their feet on the tables, competing to see who could throw books farthest out the window. Police were called routinely to break up fights. Two boys had recently been suspended for “mooning” their female teacher. More than half the teachers transferred annually. It was June 1997 and Lawrence Heights was looking for a new vice-principal. Chris Spence eagerly took the job. It was exactly what he was looking for. The Lawrence Heights area comprises mostly public-housing complexes. Eighty-seven percent of the students or their parents are immigrants from 31 countries: 24 languages are spoken in the hallways. Drug dealers, gangs and the sound of gunfire weren’t uncommon in the neighbourhood. Parents who could sent their children to schools elsewhere. In May 1998 the principal of Lawrence Heights transferred to another school and Chris Spence became principal. In April 2000 Lawrence Heights, three years earlier at the bottom of the heap, rated above the provincial average in reading, writing and math exams. At the end of the 1999-2000 school year, there were only a handful of fights, and lates, once over 3000, had dropped to 400. There was a waiting list to teach at Lawrence Heights.On Time! On Task! On a Mission! tells the story of Chris Spence’s amazing success and how it was achieved. -adapted from an article in the Reader’s Digest