The Westray Disaster and Its Aftermath 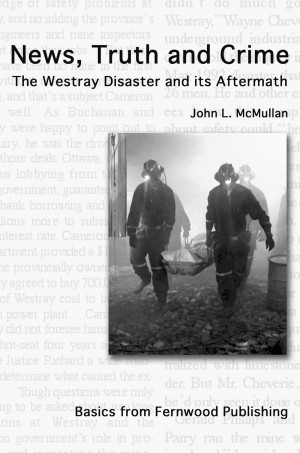 The “truth” behind the Westray mine disaster remains a highly contested matter. This book is a study of how the media represented the events surrounding Westray. The absence of investigative reporting in favour of sensational stories about accidents and the pain and suffering of the bereaved obscures the truth. More importantly it presents a false truth so the question, “What happened at Westray?” remains largely unanswered. The answer to the question, “Who is responsible?” has been lost in the cover-up; a cover-up aided and abetted by the news reporting.

Through a recounting of the tragedy and the way it was reported in the media, McMullan seeks to show the relationship among power, discourse and the production of truth. The book provides an analysis of news as a truth-telling exercise; it is an analysis of how news is produced. Using Westray as a case study, this book analyzes the relations among power, claims-making and the production of news. In the final analysis, McMullan concludes reporters and editors, rather like corporate executives, seem to see their own virtue reflected in the guilt of those beneath them. They are not only confused about corporate crime, they are misdirected as to the distribution of crime in general. In the case of Westray, mystification and misdirection preserve the appearance of corporate respectability and helped keep hidden the underlying reality behind the explosion.