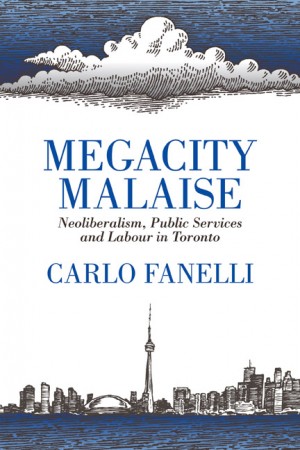 “[A] political economist with a gift– due to his not having forgotten his working class background– for bringing complex economic problems down to their real world implications for working people.” - Jeff Noonan

“Fanelli does a very good job of demonstrating that the problem is not overpaid public sector workers, and that repeated demands for union concessions and more “flexible” work arrangements are misplaced.” - Jim Silver

Megacity Malaise documents how municipal governance, labour-management relations and public services have been transformed during the postwar period. Carlo Fanelli begins with an analysis of neoliberalism, exposing the underlying social and political causes of urban fiscal crises. Fanelli shows how municipal finances have been eroded to justify the policies of permanent austerity, which has led to a deterioration of public services and demands for concessions from civic workers based on the contention that they are unaffordable. Focusing on the post-amalgamation era at the city of Toronto, Fanelli draws on his experiences as a former city worker and trade unionist to make the case that a new municipal agenda infused with a sense of social and workplace justice is necessary to overcome mounting registers of social inequality. Alternative approaches to public policy must be rooted in a political project that challenges the continued reliance on tax cuts as a cure for nearly all of society’s social ills and municipal governance that rejects the marketization of everyday life.