How the Television Makes Us Stoopid! 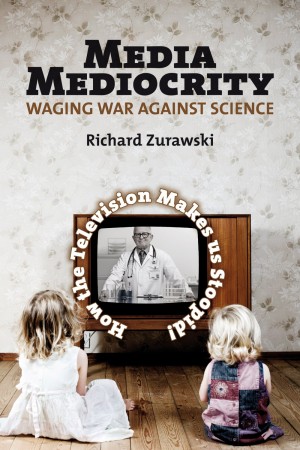 We have all, at some point, seen science in action on television. Whether it was a show about disasters or weather, nature or the universe, a science commentator, even a crime show depicting forensic evidence – we have all gleaned tidbits of scientific information while being entertained by our televisions.

From science channels and documentaries to fictional and children’s programming, television brings a myriad of scientific discoveries and theories into the homes of people around the world. But how accurately do these programs represent science? In Media Mediocrity, television producer and broadcaster Richard Zurawski argues that the science we learn on television is inaccurate, misleading and sometimes even dangerous.

Dealing with issues such as tobacco consumption, global warming and Intelligent Design – and a host of pseudoscientific pursuits like UFOs, ghosts and the afterlife, Media Mediocrity examines how television producers’ pursuit of ratings and profit trump any desire to provide the audience with an accurate knowledge of science – and argues that there are real consequences for this lack of knowledge. Four out of five viewers gather the bulk of their scientific knowledge from television, making television an important intermediary between society and its understanding of science. If television gives us misleading – or blatantly false – scientific information, how can we hope to make informed decisions about scientific issues? Equally importantly, who is it that is feeding us this false science? And what do they gain from doing so? If you think your TV has made you an expert, then read this book – and think again.