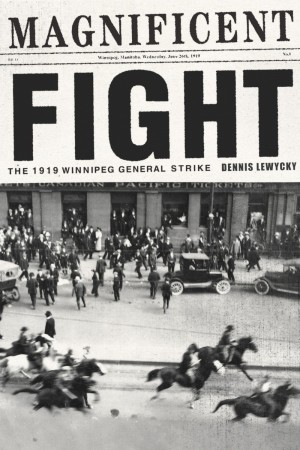 In May 1919, 30,000 Winnipeg workers walked away from their jobs, shutting down large factories, forcing businesses to close and bringing major industries to a halt. Mounted police and hired security, at the behest of the ruling class, violently ended the protest after six weeks. Two men were killed. What started as trade union revolt, the Winnipeg General Strike became a mass protest and was branded as a revolution.

In Magnificent Fight, Dennis Lewycky lays out the history of this iconic event, which remains the biggest and longest strike in Canadian history. He analyzes the social, political and economic conditions leading up to the strike. He also illustrates the effects the strike had on workers, unions and all three levels of government in the following decades.

Far from a simple retelling of the General Strike, Magnificent Fight speaks to the power of workers’ solidarity and social organization. And Lewycky reveals the length the capitalist class and the state went to in protecting the status quo. By retelling the story of the Strike through the eyes of those who witnessed it, Lewycky’s account is both educational and entertaining.

“Magnificent Fight should be required reading for all activists striving to build a better world.”

“A wonderful commemoration of the Winnipeg General Strike and exploration of its meaning for today’s Canada. I recommend Magnificent Fight to all.”