A Short Guide to Tax Havens 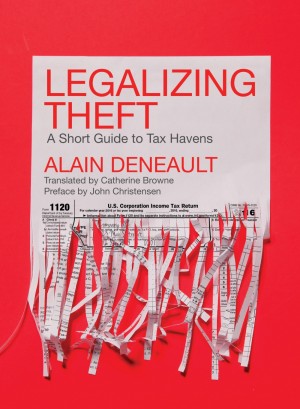 When our infrastructures deteriorate, when social benefits are frozen, when our living conditions are precarious, it is because of tax havens. A source of growing inequalities and colossal tax losses, the use of tax havens by large corporations and wealthy individuals explains the increasingly popular austerity policies of governments in the West.

With formidable efficacy and clarity, and in the wake of the Paradise Papers leak, Alain Deneault raises the political questions behind of this legalized theft: What are the consequences of tax havens? How do we counter the private sovereignty thus conferred on the powerful? As taxpayers shoulder the social and financial burdens while corporations hide billions in off-shore tax havens, Deneault identifies the urgent need to put an end to this legalized theft.

“In this timely and powerful book, Alain Deneault unveils the scope of the problems created by tax havens, and documents the many ways in which they are weakening the very bonds of our society. Importantly, he shows how Canada – contrary to popular belief – lags behind the world in taking steps to clamp down on this ‘system of legalized theft.’