Jobs of Our Own 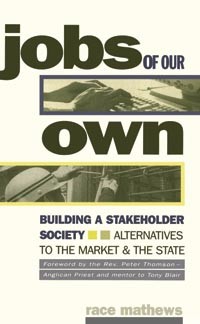 With little enthusiasm for state ownership, no trust in the unbounded free market and confusion about the Third Way, veteran Labour thinker, Race Matthews argues for ‘distributism’-the belief that ownership should be widely distributed rather than concentrated in the hands of the state or wealthy minorities.

“In Britain, Canada, Spain and Australia, there have been ongoing efforts to develop and alternative and kinder way of doing business-a Middle Way-dating back to and beyond the opening of this century. Race Matthews has uncovered a fascinating and unexpected linkage between these apparently unconnected reform movements. Are these the roots of a 21st century renaissance?”