An Introduction to Political Economy 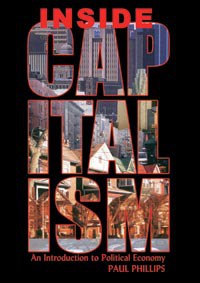 These days almost anyone is bound to be depressed by the litany of economic woes we are told are besieging Canada. At the same time, mainstream economists, politicians and business leaders claim that workers’ wages must fall, the social safety net must be stripped away, taxes must be cut and environmental regulations must be relaxed. “There Is No Alternative” if Canada is to be competitive.

But is this the case? If we are to even begin to respond to this new economic mantra we have to know what makes our economy tick. In Inside Capitalism, Paul Phillips introduces us to political economic analysis–why firms behave as they do, why we have such a high level of economic monopoly, who benefits from the economic structure of capitalism. In so doing, he not only shows that traditional economic analysis is mainly ideology, but we can clearly see that the dismal prospects that average Canadians face are not the result of immutable economic laws but of the political and economic power that business has amassed with the aid of successive governments and the Bank of Canada.