By Zoë Robertson and Jesse Life 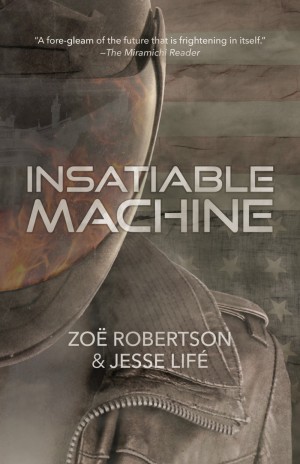 Wave goodbye to the American dream.

Just a heartbeat into the future, America is being dragged to its knees by social unrest and economic inequality. The furious pace of technological advancement has made medicine capable of near-miracles but has also enabled the widespread displacement of workers by automated systems. As unemployment and poverty levels rise to dangerous heights, those with fortunes to lose are pitted against those with nothing left. The threat of rebellion looms greater every day.

When a chance meeting in a Washington, D.C., slum leads journalist Richard LaPointe to a heinous discovery, he and his wife, internationally respected physician and medical technologist Allie MacKay, start down a path that exposes just how far those in power will go to protect themselves from the impending crisis. When their daughter, Skyie, an online video activist sensation, gets involved after pulling off a spectacular protest stunt, they are all plunged into a world in which no one is safe.

What they find behind the curtain is not an America made great again. It is an empire in ruin.

Think Tom Wolfe, but more speculative and tilting to the left. With plenty of action, politics, and high tech, Insatiable Machine is a real treat.

A fore-gleam of the future that is frightening in itself.

If you like dystopian style novels with science fiction thrown in, this is a big recommendation.