An Introduction to Logic and Critical Reasoning

By Leslie Armour and Richard Feist 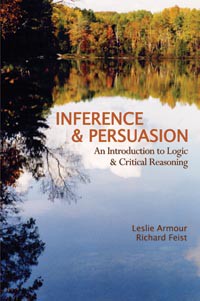 The central concern of Inference and Persuasion is logic and how becoming better informed about logic ultimately brings more autonomy to thinkers. Part one considers the relationships between reasoning, thought and the world. Becoming clearer about the nature of reasoning, the book stresses, helps to free us. But the logic one chooses must be defended as much as any other body of belief. Unlike standard critical thinking texts, Inference and Persuasion investigates the problems involved in such justifications. Part two is devoted to a consideration of standard logics, including Aristotle’s and modern mathematical, as well as lesser known logics such John Dewey’s and Hegel’s. The goal is to show that the problems of logic are alive and well, not long-settled. Part three discusses how logic and belief relate to one another and offers a non-traditional perspective on the traditional fallacies. The final section considers logic within the context of various academic disciplines. A key point is to show that the ways in which we reason about the world presuppose much about that world.