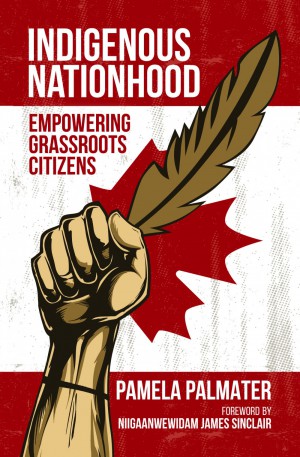 Fiercely anti-racist and anti-colonial, this book is intended to help rebuild the connections between Indigenous citizens and their home communities, local governments and Indigenous Nations for the benefit of future generations.

“Through Palmater’s relentless pursuit for justice and improved quality of life, she will undoubtedly set a new era for positive change for this country.”

“Palmater’s blogs provide a glimpse of the deep complexities we face as indigenous peoples living in a colonial Canada. Her words are the articulation of this generation’s frustration with Canadian colonial policy.”

“This work is vital in terms of ‘de-entrenching’ a Canadian problem affecting an entire country — a colonial experiment gone bad. Pam’s insights are important and reliable.”

“Pamela Palmater is one of the strong voices of a new generation of Native activists and intellectuals. Her essays on Indigenous Nationhood are intelligent, thoughtful, and well informed. And they take no prisoners.”