If You’re in My Way, I’m Walking

The Assault on Working People since 1970 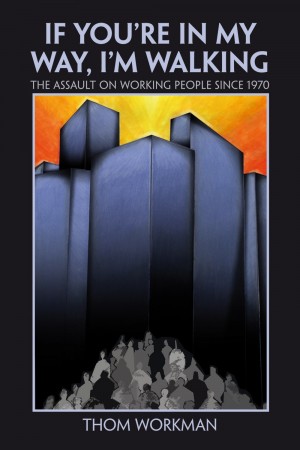 “If you’re in my way I’m walking.” This arrogant statement by former Prime Minister Jean Chrétien on the occasion of his physical altercation with a protester in Hull, Quebec in the mid-1990s symbolizes the spirit of the relentless drive of capital to rewrite the historical compromise reached with working people after World War II. This early post-war compromise–sometimes referred to as the Fordist Compact–was associated with improving wages and rising living standards for working people. But in recent decades those achievements of the working class are being deliberately rolled back.

Workman surveys many features of this experience: changing public perceptions of working life, the deregulation of labour law, the decline in unionization rates, the eclipse of union militancy, the stagnation of real wages, the disproportionate absorption of women into the low-wage sphere and the dismantling of social policy. He demonstrates the unravelling of the post-war compact and its replacement with a far more ex-ploitative relationship between capital and labour. He also points to the decline of the Canadian left and its inability to counter the capitalist onslaught effectively. Nevertheless, there are reasons to be hopeful. Workman calls for a rebuilding of the left through the restoration of left culture. To do this he says that the left must “quit politics,” work to promote the collective memory of working-class achievements, create venues to listen to working people in today’s economy, reject nationalism outright and encourage the labour movement to exploit its disruptive capacity. This revitalized left will form the basis of a deepening social critique, the political lessons of which will prove to be invaluable for working people in the long run.

“Workman’s book deserves to be read as widely as possible. No other book provides such a detailed account of the contemporary state of working people in Canada. If You’re In My Way offers much thought-provoking material that deserves serious discussion on the socialist left.”

“If you’re committed to social justice, read this book. Thom Workman’s study combines thoughtful analysis with a ruthless condemnation of the real-life effects of unbridled capitalism. The case for restoring a ‘left culture’ is particularly compelling; it marks the beginning of an important and provocative conversation that is sorely needed.”

“Bravo to Thom Workman for his beautifully written, highly accessible, empirically rich and analytically profound account of the pathologies of contemporary Canadian capitalism. This is a truly exemplary class analysis, all the more so for being eminently readable and drawing deeply on popular culture. The fact that it is topped off by a stunningly clear-headed examination of the limitations of the Canadian political left and labour movement, coupled with an inspired call for the revitalization of a left culture oriented to the promotion of worker-friendly organizations and parties aiming a post-capitalist world, makes it incredibly timely. A must read and one that should be shared and discussed very widely.”