P3s in an Age of Austerity 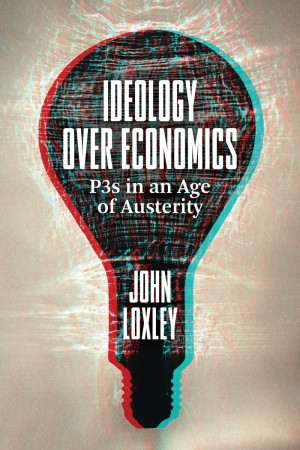 Public private partnerships in which the private sector takes on roles previously carried out by the public sector have been heavily promoted in the provision of infrastructure throughout the world, but especially in the UK, the USA and Canada. In Ideology Over Economics, economist John Loxley examines the expansion of P3s following the 2008 global financial crisis, when corporations responded to the crisis by lobbying governments for financial assistance and austerity governments responded by expanding financial resources for P3s. For many governments, the rationale for using P3s lies in the state manufactured fiscal crisis. The usual economic arguments underlie government largesse – lower cost, reduced risk and high-quality construction for public projects. In these arguments little has changed.

From his close examination of case studies of P3s in the UK, Canada and developing countries, John Loxley concludes that P3s do not achieve any of these promised goals and argues that the expansion of P3s owes more to ideology than to a rational evaluation of their economic and community building benefits.