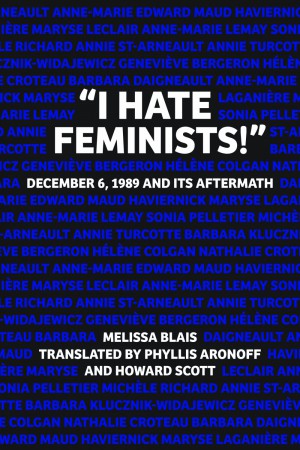 On December 6, 1989, a man walked into the engineering school École Polytechnique de Montreal, armed with a semi-automatic rifle and, declaring “I hate feminists,” killed fourteen young women. “I Hate Feminists”, originally published in French in 2009, examines the collective memory that emerged in the immediate aftermath and years following the massacre as Canadians struggled to make sense of this tragic event and understand the motivations of the killer. Exploring stories and editorials in Montreal and Toronto newspapers, texts distributed within anti-feminist “masculinist” networks, discourses about memorials in major Canadian cities and the film Polytechnique, which was released on the twentieth anniversary of the massacre, Mélissa Blais argues that feminist analyses and the killer’s own statements have been set aside in favour of interpretations that absolve the killer of responsibility or even shift that blame onto women and feminists. In the end, Blais contends, the collective memory that has been constructed through various media has functioned not as a testament to violence against women but as a catalyst for anti-feminist discourse.