Holocaust to Resistance, My Journey 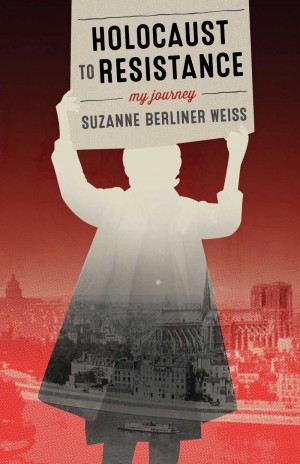 Holocaust to Resistance, My Journey is a powerful, awe-inspiring memoir from author and activist Suzanne Berliner Weiss. Born to Jewish parents in Paris in 1941, Suzanne was hidden from the Nazis on a farm in rural France. Alone after the war, she lived in progressive-run orphanages, where she gained a belief in peace and brotherhood. Adoption by a New York family led to a tumultuous youth haunted by domestic conflict, fear of nuclear war and anti-communist repression, consignment to a detention home and magical steps toward relinking with her origins in Europe.

At age seventeen, Suzanne became a lifelong social activist, engaged in student radicalization, the Cuban Revolution, and movements for Black Power, women’s liberation, peace in Vietnam and freedom for Palestine. Now nearing eighty, Suzanne tells how the ties of friendship, solidarity and resistance that saved her as a child speak to the needs of our planet today.

“Suzanne Berliner Weiss offers a page-turning narrative about her remarkable life of survival, resistance and solidarity. Hidden as a Jewish child from the Nazi regime of Vichy France, Suzanne shares her childhood journey from fascism in Europe to adoption in an American home in Cold War USA. Motivated by an unstoppable drive and experience of consistently standing with the oppressed – from Cuba to Vietnam to Palestine, from women’s liberation to Black power to environmental justice – Suzanne returns decades later to the town that protected her as a child. For everyone who wants to change the world, please, read this book.”

— Abigail B. Bakan, University of Toronto

“Holocaust to Resistance offers a very rich slice of social history, providing a down-to-earth, very personal narrative extending from the Second World War into the Age of Trump: the life-journey of a Holocaust survivor whose entire life became a resistance against the deep-seated structures of inhumanity.”

“Suzanne Weiss exemplifies what it looks like to dedicate one’s life, post-Holocaust, to the mandate of ‘Never Again’ – for anyone. Her fascinating life story is sure to inspire many generations of activists.”

“Suzanne Weiss masterfully navigates the reader through the distinctive stages of her passionate journey through a life bursting with political commitment. The result is a rediscovery of the past that will fascinate and inspire.”

“If Suzanne Weiss story is so deeply moving, it is because she is a living testimony of solidarity: the human solidarity of the French peasants who saved her, as a Jewish child, from the Nazi murderers in occupied France; and her own lifelong socialist commitment. “

“Suzanne portrays the intersection of individuals and groups, of the psychological and the political. She speaks of things rarely addressed yet vitally important at this time that demands radical change.”