Growing Up Salty and Other Plays 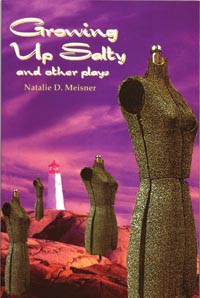 The questions raised in Natalie Meisner’s plays will follow you out the door. At their root is the ghost that haunts the modern theatre: What is the role of live theatre in the information age? Why is it necessary? What do we get from the experience that cannot be had in any other artistic medium?

As the plays progress, elements of parody and slapstick are used in tandem with highly-charged dramatic moments in order to challenge the traditional role of the audience member.

(Am I an observer, conspirator, antagonist?)

Two of the plays, “Growing Up Salty” and “Frank PLummer, You Ain’t Dead” are set in rural Nova Scotia and deal with the collapse of the fishing industry and its impact on the family unit. “The Attic” and “The Greatest Show on Earth” were produced by The Chestnut Tree Theatre. “Growing Up Salty” was produced for the Atlantic Fringe Festival.