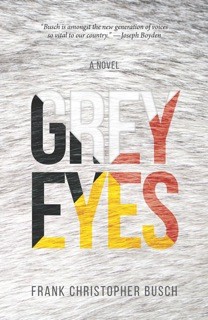 Winner of the 2015 Burt Award for First Nations, Metis, and Inuit Literature!

In a world without time and steeped in ceremony and magic, walks a chosen few who hold an ancient power: the Grey Eyes. True stewards of the land, the Grey Eyes use their magic to maintain harmony and keep evil at bay. With only one elderly Grey-Eye left in the village of the Nehiyawak, the birth of a new Grey-Eyed boy promises a renewed line of defence against their only foe: the menacing Red-Eyes, whose name is rarely spoken but whose presence is ever felt. While the birth of the Grey-Eyed boy offers the clan much-needed protection, it also initiates a struggle for power that threatens to rip the clan apart, leaving them defenceless against the their sworn ememy. The responsibility of restoring balance and harmony, the only way to keep the Nehiyawak safe, is thrust upon a boy’s slender shoulders. What powers will he have, and can he protect the clan from the evil of the Red Eyes?

Check out “Grey Eyes in the Classroom,” the IndieGogo campaign aimed to donate copies of Grey Eyes to underfunded First Nation schools across Canada:

“With his novel Grey Eyes, Frank Busch taps into the traditional in a way I’ve not seen before. At once historical and fantastical, Grey Eyes reclaims some of our most powerful stories with authenticity and with heart and with that bit of magic that brings all of it to such beautiful life. Busch is amongst the new generation of voices so vital to our country.”

— Joseph Boyden, author of The Orenda, winner of Canada Reads 2014

“…at once an intricate portrait of pre-contact life and a suspenseful page-turner that builds towards a dramatic and moving finish. As a novel it is a success – one that may benefit, and certainly entertain, indigenous and non-indigenous Canadians both.”

“Frank Christopher Busch has created one fine piece of fiction with this novel. Looking forward to going along on the next adventure.”

“Grey Eyes invokes some soul-searching for the reader as the traditional values interwoven through the book will make them think about how far they have ventured from or stayed true to what we know is right and why.”