A Canadian Primer for Hosers, Immigrants and Socialists 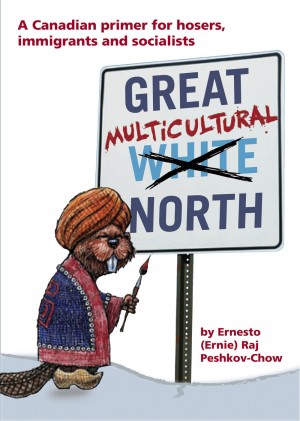 Canada is a funny place, with funny people and an even funnier system of government. In fact, according to ComCan, a division of the Intellectual Property branch of the Department of Trade, Industry and Digging Deep Holes into the Earth, about 4.16536356 per cent of our GDP is a direct or indirect result of our sense of humour. In addition, the ability of Canadians to laugh at themselves is one reason this country could lead the planet past ethnic, political and economic divisions, according to author Ernesto (Ernie) Raj Peshkov-Chow. In Great Multicultural North: A Canadian Primer the self-described Mongrel-Canadian argues that our geography, form of government, mythology, history, sense of humour and mass immigration gives Canada the opportunity to develop the world’s first post-ethnic, democratic, internationalist nationalism. Great Multicultural North is both a primer (soft i) and a primer (hard i). It is a short, easy to read explanation of Canada and a small charge that sets off a bigger explosion of a new sort of Canadian nationalism.