Imperialism in the 21st Century

By James Petras and Henry Veltmeyer 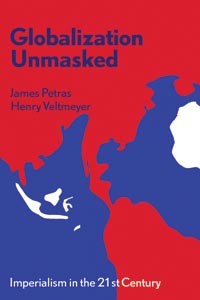 In this book, the authors contend that “globalization” is little more than imperialism in a new form. They argue that the “inevitability” of globalization and the adjustment or submission of peoples all over the world to free market capitalism depends on the capacity of the dominant and ruling classes to bend people to their will and convince people that their interests are the people’s interests. A key element in theorizing about globalization and in organizing to resist it is an understanding that globalization is propagated not to bring a better and more just world to the masses of the people but, as has always been the case with imperialism, to advance the interests of those who already enjoy power and privilege.

“This impressive study lives up to the promise of its title. With careful conceptual analysis and rich empirical evidence, the authors present a powerful and persuasive argument that the anodyne rhetoric of ‘globalization,’ ‘markets,’ ‘democracy,’ and other pleasant and apparently neutral terms, conceals realities that are far better understood within the framework of imperialism and class conflict. Their wide-ranging and penetrating inquiry yields much insight into the core structural features of the evolving forms of domination and control, their severe human costs, and the popular resistance engendered. It is a contribution of unusual value for those who hope not only to understand the world, but also to change it, drastically, for the better.”

“A rich, revealing, and powerful exploration of the ideology of ‘globalization’ and the free-market imperialism behind it. A vital in-depth education for both advanced students and laypersons.”

— Michael Parenti, author of History as Mystery and To Kill a Nation: The Attack on Yugoslavia Winner of the Robert S. Kenny Award, 2002