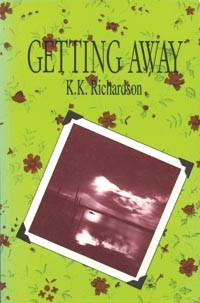 “After trying numerous times to get Peter and Teddy and the nightmare scene of the sliding car off my mind, I finally got up and lit the fire. I walked around and around the tiny area, colliding with the rockers of my favorite chair or avoiding shin hits on the sharp-edged table covered with magazines. I didn’t even light a candle. The glow from the fire lightened the gloom a bit but my own gloom I could hardly deal with. I should have spent more time with Peter. I should have talked to Jim and tried somehow for him to understand Peter. I should have brought Peter more closely into my own neutral world of books and talk. He could have been less lonely, more able to talk about Janey. I might have penetrated Mrs. Irwin’s defence of her privacy had I not been timid, or so sure that she, as an old woman, had the right to cling to her view of things no matter how damaging they might be to Peter. Sometimes I just laid my head down on the kitchen table and allowed the vision of Peter, his puppet legs lying helplessly in the mud, to overwhelm me.”