After US Hegemony, Globalization and Empire 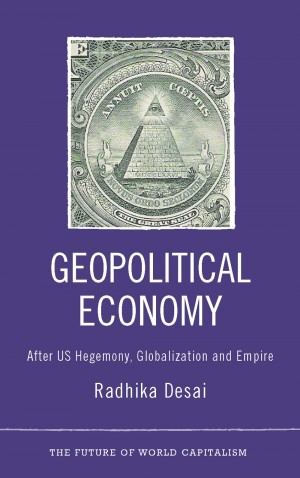 Geopolitical Economy radically reinterprets the historical evolution of the world order, as a multi-polar world emerges from the dust of the financial and economic crisis.

Radhika Desai offers a radical critique of the theories of US hegemony, globalisation and empire which dominate academic international political economy and international relations, revealing their ideological origins in successive failed US attempts at world dominance through the dollar.

Desai revitalizes revolutionary intellectual traditions which combine class and national perspectives on ‘the relations of producing nations’. At a time of global upheavals and profound shifts in the distribution of world power, Geopolitical Economy forges a vivid and compelling account of the historical processes which are shaping the contemporary international order.

“This impressive book powerfully questions the conventional wisdoms of both the right and the left about U.S. hegemony, globalization, and the “new American empire.” Professor Desai takes us back to Marx and Engels and forward to Keynes, Polanyi and Brenner to give us a coherent narrative of capitalism’s history and its future prospects. The nation-state, it turns out, is not withering away. This is radical scholarship at its best.”

“This is a refreshing book with a punch. Desai not only charts the end of an era in global political economy, she offers us a stimulating framework for understanding the coming multipolar period, one full of promise if only we recognize its key features. Catholic in scope, Geopolitical Economy draws on a rich diversity of scholarly traditions to fashion a new outlook on political economy, one which combines the global thrust of capitalist dynamics with what she calls the fundamental materiality of the nation-state. It promises to have a significant impact on scholarship, and I recommend it to anyone interested in comprehending the changing political, economic and social contours of our world.”

“You are not likely to find a better contemporary history of the world’s economy than this one. It is hard to put down, but the greater joy is that it undoes myth after myth about neoliberalism’s inevitability and the neoclassical abstractions that economic history has little to do with the state any longer. The state and class battles will continue, and had better, argues Professor Desai.”